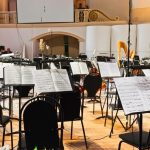 Architectural acoustics is the study of optimizing sound for the ultimate effect in a given space. Designing these spaces, usually concert halls, theatres or auditoriums, takes thorough knowledge of materials and how they react with and or reflect sound.

There is typically no one material to use in a space that will yield the optimal sound, especially in a large concert hall. There is certain material that works best alongside other material to help make the best experience for the listener. Acoustical engineering is the study of which material will work best in certain buildings based on layout, size, seating orientation and shape.

When most of us picture a concert hall, we imagine a light-stained wood back drop. Highly polished and heavily finished wood is meant to reflect sound and project it on the audience. But what else do you picture in a concert hall? There are plenty of other components working together to project the perfect sound. For example, rougher surfaces such as ceiling tiles are useful for absorbing or detracting sound, as are curtains.

Stage curtains are so often used because they can be easily moved and manipulated. Than can also be easily included or removed based on the performer’s desired effect. They typically will divide the audience from backstage, where there tends to be much more noise, and from interference outdoors or beyond the concert venue.

Acoustical engineers and architects are faced with more than choosing and installing the best material for a job. They must also determine optimal shape and seating orientation. This includes wall placement in relation to the stage or sound pit along with seating orientation, from where the audience will be listening.